#10 on Drake's Halloween Film List is the 2009 is the almost (if its Rotten Tomatoes score of 11% is to be believed) universally hated David S. Goyer creepfest THE UNBORN. 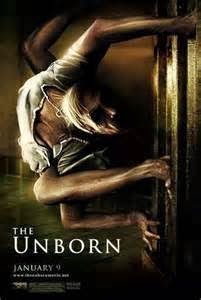 David S. Goyer has enjoyed a recent resurgence in the entertainment industry with the wicked success of his treatments and screenplay work on Christopher Nolan's Batman trilogy, Man of Steel, and is also in talks to begin work on the long-rumored Justice League film.

His backlog of work is filled with hurdles, the man has worked on just as many failed projects (Blade tv series, Flashforward, Ghost Rider: Spirit of Vengeance) as he has successful projects (Da Vinci's Demons, Blade trilogy). Based on what imdb has listed as upcoming work, the man seems to have hit his stride with the superhero/videogame genre (Metal Gear Solid, Batman vs Superman, Justice League.)

While this end of the decade horror movie was dropped in January (for those of us that aren't  film nerds, January is the month that is considered a dumping ground for studios. The movies released are the ones the studios consider stinkers, non-blockbusters). The track record for these movies are not typically good, but despite the bad rap, the movie had a budget of $16M and made almost $77M worldwide, so it wasn't necessarily a bad investment.

The movie starts out with a girl describing her dream of a creepy little kid and a dog wearing a mask, while her friend is futilely trying to help decipher the dream, she hears a child's voice over the baby monitor. She moves upstairs to find one of the children she's babysitting shining a mirror in the face of his infant sister. He informs the Sitter that "Jamby wants to be born now" and immediately slices at her eye with the handheld mirror.

As the story progresses, the girl continues to see the boy from her dream, sometimes wavering in the distance, sometimes lunging at her from her bathroom mirror. After a visit with her father, she learns that she had a twin brother that died in utero and comes to believe that this spectre is the spirit of her dead brother haunting her.

A lot of other moody, creepy shit happens: gross insects crawling around in a freshly cracked egg, whispers through a gloryhole (in a women's restroom), a bathroom that fills with shit and rends itself apart (a dream sequence COMPLETELY lifted from Lost Souls, the Winona Ryder, spiritual horror flick). Also, the completely unsettling imagery that sold this for me was the people crawling on all fours with their heads twisted upside down

The girl begins to fear that she's headed down the same road as her late mother, who committed suicide in a mental hospital. But other fears begin to press in as the people who come alongside her to help investigate what's happening to her, and why, begin to drop dead the closer she moves to the truth.
The plot moves around at lightning speed from World War II, Nazi experiments, and twin superstitions. The most interesting of these being the inclusion of Jewish mysticism with the stories of a dybbuk (a topic handled much better in 2012's The Possession.) To my knowledge, this is the first movie to include a Jewish exorcism rite, and definitely the only one to have a dual exorcism performed by a rabbi and Episcopalian priest.

The climax is entertaining enough but soon the spirit starts jumping from body to body like some fucked up, supernatural game of musical chairs, begging the question: why didn't it just stay in that body if it wanted to live so badly? And a scene where a man is able to punch through cement walls but an inability to knock someone out.

A final scene revelation montage adds some clever twists explaining why it's taken, y'know 80 years to get to this point but it's a sad case of too little too late.

While this movie had a lot of very interesting elements to it, a sexy supporting role from Cam Gigandet (yes, there is a shirtless scene), and with David Goyer's penchant for dark, scary atmospheres, this movie ultimately fails to capitalize on its strengths.

If you want to see a horror film that abandons the Christian perspective of demonic possession in favor of some other explanation, this is a decent entry to check out. The atmopshere is dark and creepy, the jump-scares are visceral enough, and the actors capably carry this movie.

It feels like it wanted to be a more suspenseful, creepy melodrama flick that relied a little too heavily on the scares that work for South Korean horror movies (which we'll discuss shortly). It would have worked as a short film or maybe as an entry in the long-forgotten Masters of Horror series, but as a full-length feature it's left struggling to find its feet.

RottenTomatoes Score: 11%
DrakeMarcos score: 2 out of 5 contortionists
Posted by Unknown at 2:24 PM