The psycho-erotic, sexual thriller LOVE OBJECT is a very refreshing twist on the obsessive angle, and one that I had trouble adjusting to after years away from it.

As indie a thriller as it gets LOVE OBJECT uses the darkness and light and washed-out tones throughout to reflect mood changes in characters and plot points and is pretty uninspired in this regard.

The first half hour is a bit of a stumbling block as you try to get inside the main character's head, at times realizing that you don't really want to be in there when you realize his underlying pinnings.

It starts off with an extremely socially awkward copywriter for a tech company as he and his male coworkers are discussing the creation of the first ever, completely life-like sex doll. Possessing real human hair, rubber silicone skin, and for just $10,000, you can build and customize everything about her, from hair color, to eye color, to lip shape, etc.

The only thing it doesn't possess is a soul...or does it?

The main character, Kenneth, is given a massive project by his boss, with a near impossible deadline, and a promise of a huge bonus. To help along with the process, his boss appoints a girl, Lisa, from the typing pool to assist him.

The attraction of Lisa to Kenneth is very strong and evident, but Kenneth is shy and unaccustomed to attention from members of the opposite sex. Losing himself in a fantasy world when he takes a trip to the site that sells the dolls, he begins to build the girl of his dreams. He models it after his assistant, Lisa.

He settles into a routine with his new doll, Nikki, living with her, sleeping with her, and having date nights as if she were alive.

The misogyny of the lead character really prevented me from having any desire to cheer him on as a protagonist. He had a girl pretty much throwing herself at him and he had no desire, but builds a doll to look just like her (and, over time, BE  just like her). Yet, she doesn't have a mind/will of her own, she's just a doll. Something he can manipulate...control. So he thinks.

The trouble starts when Kenneth's abject fear of women begins to dissipate. His comfort and familiarity with Nikki enabling him to loosen up around Lisa, whom he's grown incredibly fond of. But not everyone is happy with his new found confidence.

The evidence for Nikki actually having a mind...being alive starts when she shows up on Kenneth's doorstep, the straps holding her into the box broken. It becomes stronger when his world begins to spiral out of control as Nikki begins speaking to Kenneth, threatening to ruin his life and hurt Lisa if he continues on with both women. He begins having nightmares, Nikki attacking him, strangling him, locking him in the box she came in.

He desires to break free of Nikki, yet she has become too real, too powerful. This becoming evident after a failed tryst with Lisa. Seeing her naked for the first time: her tongue ring and tattoo cause him to lose his erection as the real Lisa fails to live up to flawless Nikki. He realizes he has to forcefully separate himself from Nikki if he ever wants a life of happiness with Lisa.

But Nikki is not letting go without a fight.

The movie rapidly shifts: Is Kenneth crazy? Or is Nikki developing an awareness?

Will Kenneth learn to escape the clutches of Nikki and follow his heart with Lisa? Or is Nikki's allure and pull on Kenneth too strong?

So much happens in this little independent film and what I've written here only begins to scratch the surface of a pretty intricately woven, self-aware, smart horror film. The third act of this film peels back all of the thick layers and gives you a peek at what we're actually witnessing. And it's pretty damned amazing. 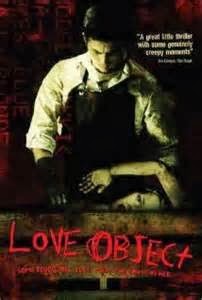 My only gripe was that the ending squashes any, and all, hopes I had that this would be an empowering film with a strong message. But the end is such a nasty, little twist that I found it to be smirkingly enjoyable.