Money has been spent, and studies have been conducted on sexual hangups and human sexuality in general. While I think that my sexuality is, for the most part, fixed (I've experienced nothing that has changed it as of yet) I'm not so sure if I subscribe to a certain theory.

Some people say men are homosexual because of spiritual torment, gender confusion, childhood rape, improper potty training...people are so obsessed with finding out why something happened but even if a cause can be traced, what's the point? And even then, maybe I just like guys.

I've jokingly said in the past that women and their parts terrify me. I've even gone so far as to say that, "vaginas are the devourer of worlds." I've said that they remind me of this:

But, all jokes aside, women just don't do it for me.

Had I seen tonight's film back when I was trying to explain my sexuality, I might have cited it. 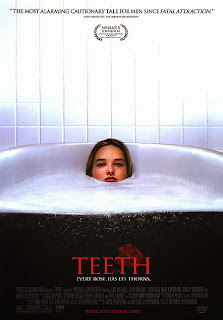 Teeth is another slow-burn horror film, but it can also be considered a feminist manifesto, or maybe even a morality/cautionary tale.

A young girl named Dawn is somewhat awkward (not so much as our friend from yesterday, May) as she grows up. Her divorced and remarried family living in a town that is built around a nuclear plant (which may, or may not, hold the key to Dawn's mystery). One warm summer day, Dawn has an experience with her stepbrother when, in a kiddie pool not even 100 feet away from their parents, he says "Ok, now you show me yours."

He soon starts screaming, his finger bleeding profusely from a seemingly unknown cause.

Fast forward 16 years and Dawn's family is still plugging away, her mother very sick, her stepfather helpless, her stepbrother oddly still harboring lust for her, and Dawn is the member of a Christian evangelical group. She and her small group of friends traveling around and talking to young children about the "gift" of their virginity and the "virtue" of abstinence and waiting until marriage.

She encounters a young man who is new to her school and soon a member of their "The Ring Club" and begins to have feelings of the sexual nature towards him. He confides in her that he is only a virgin in God's eyes and though she is disappointed continues to be attracted to him, losing herself in a nighttime almost masturbatory fantasy. When she realizes the strength of her attraction she tells him she can't see him again.

But her desires prove to be too strong as she soon calls him out to the woods for a rendezvous in a waterfall cave. She tries her best to keep her vow as he attempts to seduce her, she tries to push him off, "I'm saying no!" and he continues to push, frustrated with her refusal he bashes her head against a rock dazing her and continues to try to force himself onto her. As he finally gets what he's after, he begins to convulse and scream, backing away from her in horror, and we're shown what's gone wrong...his penis is missing.

Dawn flees from the scene and spends the duration of the film trying to figure out exactly what's wrong with her and why.

After a biology class where she learns about evolution, she seeks out a gynecologist and asks him to check for any such "adaptations." He, also, begins to force himself on her, abusing his position of power, sliding his hand into her vagina, but just like her first sexual tryst, he soon falls back screaming "Its true! Vagina dentata!" his fingers disconnected and spread across the floor.She flees the scene as well.

And that's what this film is about people: a toothed vagina.

It has a lot of other philosophical issues going on concerning sexual/gender inequality, incest, rape, religious dogma run amok, and, among others, emasculation.

Dawn is completely alone, lost in a world where the only people who can help her understand what is happening to her and her body are men. So it makes a sociopolitical statement as well...a bunch of 50-something-year-old men making laws to control women's bodies.

I'll admit, this movie is extremely far-fetched and it's kind of amazing that they were able to flesh out a full-length feature with such a preposterous idea but hey, we live in a world where movies like Human Centipede still get made.

This film is terrifying and at the same time darkly hilarious and required viewing, if for no other reason than to say you saw it.